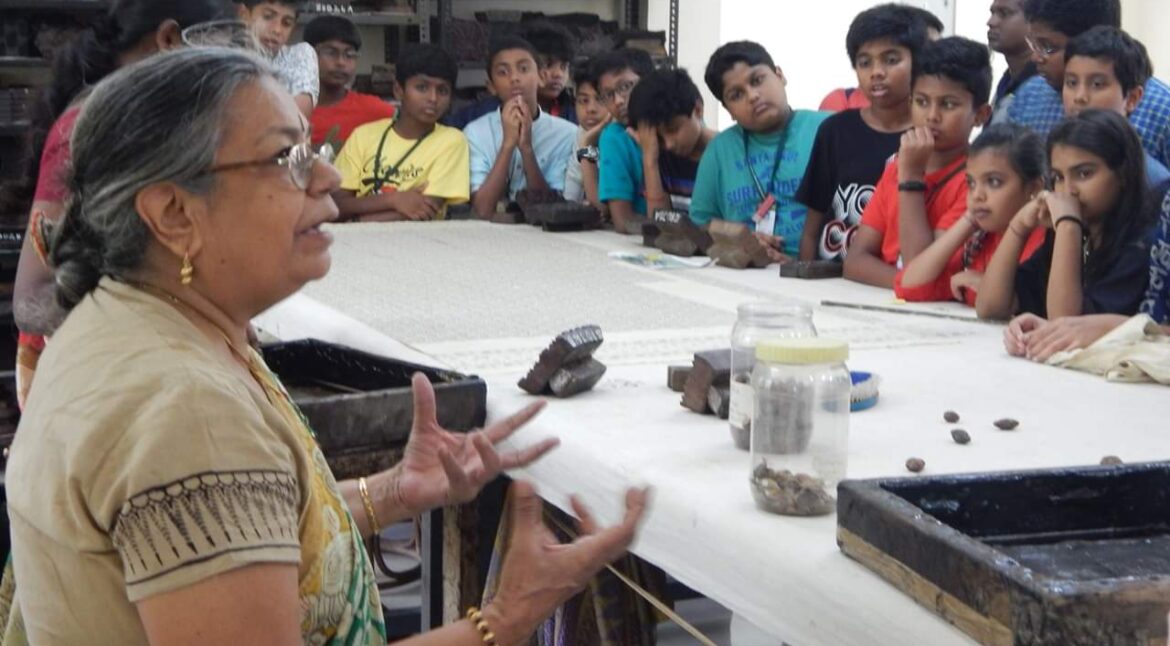 Dr.V. R. Devika is the Founder and Managing Trustee of The Aseema Trust – a non-profit organization for linking Traditional Performing Arts and Education, and Mahatma Gandhi and Education. Her PhD thesis is on “Gandhian communication for transformation: Philosophical issues and dimensions” at the Department of Philosophy, University of Madras. She often spins on the box Charkha.

Dr.V.R.Devika is a consultant for Pathashaala, KFI, Vallipuram and has also taught at SS Jain College and VIT Chennai on culture. She was coordinator for Prakriti Foundation, Chennai 1998 – 2015 and Director for Education and Culture of the Madras Craft Foundation and its project Dakshinachitra Heritage Centre (1985 – 96). During this time, she headed a folk performing arts programme in education that had schools in Tamil Nadu engage seriously with folk artists. A school teacher (P.S.Senior Secondary School,1977 – 85, Mrs.Paul’s school 1974 – 77,), and is on the Advisory Committee of Avvai Home. Mentor of Rukmini Devi Natyakshetra, she has been on the Folk and Tribal arts and Puppetry Advisory Committee of Sangeet Natak Academy, Government of India. She has been a compere, interviewer and production assistant at All India Radio since 1974 and has done several television programmes as an interviewee, interviewer and a panellist. She is trained in Bharatanatyam under the legendary “The Dhananjayans” and has researched folk forms. She gives lectures on the theory and practice of the dance and culture of India. She is a well-known storyteller.

V.R.Devika has authored “Muthulakshmi Reddy – Trail blazer for Surgery and women’s rights” monograph in the series “Pioneers of modern India” published by Niyogi Books. She was commissioned to write the coffee table biography “Ward 10 – Remembering Rangabashyam” and is an author for “Weavers”, an English language textbook series published by Indiannica, formerly Encyclopaedia Britannica India Ltd. She has guest-edited the journal Sangeet Natak: Celebrating folk and tribal forms. A freelance contributor to many publications including The Hindu, The Sruti Magazine, The Week, The Indian Express and Financial Express, she wrote a fortnightly column called “The View from the Wings” for Madras Musings for its first five years.

V.R.Devika has received the Kala Seva Bharati award from Bharat Kalachar for her contributions to arts and education, The Gnanasamudra award from Samudra Magazine, Satya Vimarshaka Sundaram from Natyanjali, British Council’s Charles Wallace Award for Arts in Education in UK, Goethe Institute’s Cultural Multiplicator Fellowship to Germany, a Certificate of Honorary Citizenship from the Governor of Maryland during her participation in the US State Department’s International Visitor Leadership programme, Women’s’ Day Honours from Women’s Indian Association (WIA), Brew Magazine and Jaycees, a Lifetime Achievement Award from the Amir Khusro Music Academy, a Best Lecture Demonstration Award from Sri Krishna Gana Sabha and Vocational Excellence awards from Rotary clubs and the Rajyotsava award from Kannada Sanghas of Chennai.